As the chart below illustrates, Congress and the president have underfunded the 2020 Census compared with previous decennials. The underfunding is more than $200 million since the start of the census cycle in FY 2012. 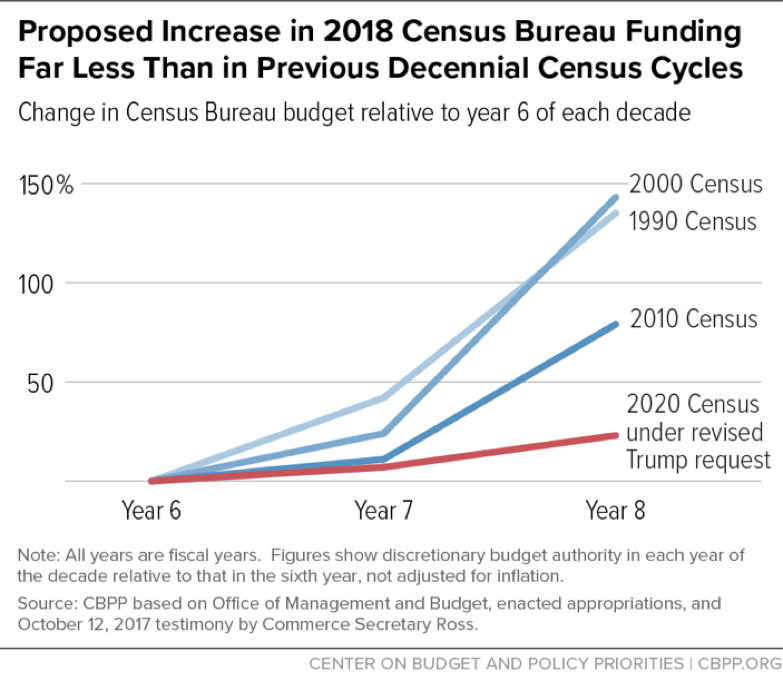 The Census Bureau is now operating under a 5th stop-gap funding measure (the Continuing Resolution, or CR) that runs through March 23. The CR boosts the Bureau’s resources over the short term, but more important is the work appropriators are doing now to finalize spending levels for FY 2018 in an omnibus appropriations bill. The administration has asked for a total of $1.684 billion for the Bureau, while we believe the agency needs at least $1.848 billion to help put 2020 Census planning back on track and strengthen activities focused on reaching hard-to-count populations, such as the Partnership Program and communications campaign. Fortunately, Congress also adopted a two-year bipartisan budget agreement that raises the overall cap for non-defense program spending considerably and, therefore, gives lawmakers room to allocate more funding for the 2020 Census. The Census Project and the Leadership Conference on Human and Civil Rights (LCCHR) networks continue to push for the higher amount.

The Census Bureau is working against the clock. Congress and the administration must ensure that the Bureau has the resources for the 2020 Census when it needs them.

President Trump requested $3.801 billion for the Bureau in his FY 2019 proposed budget. This includes $3.015 billion for the 2020 Census. However, the proposed funding level for the 2020 Census is $437 million below the Commerce Department’s own revised FY 2019 cost estimate of $3.452 billion. 2020 Census advocates believe that Congress should allocate $4.785 billion for the Bureau in FY 2019, which is $ 933.5 million above President Trump’s request, but only $475.5 million above the Commerce Department’s own cost estimate for the 2020 Census. These additional monies would fund an adequate ramp up for decennial census preparations and early operations, plus provide $21 million to restore vital ongoing economic and demographics surveys to their FY 2017 funding levels.

A number of influential stakeholders have written letters to Commerce Secretary Ross in opposition to the Department of Justice’s request to add a citizenship question to the 2020 Census form. These organizations include: the U.S. Conference of Mayors, the National League of Cities, and 19 state attorneys general.

By law, the Commerce Secretary must provide Congress with a final list of questions the Census Bureau intends to ask on the 2020 Census form by April 1 – two years before Census Day. The LCCHR has produced a useful Fact Sheet on citizenship issues.

Traditionally, the U.S. Census Bureau in the 8th year of its decennial planning cycle, tests new counting techniques with a large-scale field test. Last year, due to funding shortages, the Bureau announced that it was drastically cutting back on the 2018 End-to-End field test.

Originally, the test was scheduled for about 700,000 targeted housing units in rural West Virginia, suburban Washington State and urban Providence, Rhode Island. With funding shortfalls, the Bureau will only test 275,00 housing units in Rhode Island using new IT methods it plans to employ for the 2020 Census. The Bureau’s single test will not test the advertising/communications components of the original test plan focused on hard-to-count populations also due to funding shortages.

The implementation of the Providence test is underway with the establishment of local census offices and the recruitment of census takers.

On March 16, the Bureau will send two separate letters to the test residences asking for either an internet first reply (188,000 residences), or a letter plus a paper questionnaire indicating an internet choice (87,000 residences). Five separate mailings will be done by April 23. More than 1,000 census enumerators will then swing into action to complete the test among those who have not responded either by the internet or via a paper questionnaire. Peak operations will be April 1, exactly two years from the actual 2020 Census.

The Census Project: An Overview