WASHINGTON — The Census Project had the following statement after today’s announcement of a final omnibus budget agreement by Congress of the federal government’s FY2018 budget:

“The dismal trend of many years of underfunding 2020 Census preparations has finally been reversed with bipartisan support in Congress. Our assessment is the Bureau now has the minimum resources needed to prepare for its Constitutional mandate. However, the FY2019 funding level will be critical, and supporters of a full, fair, and accurate count will remain vigilant.”

In previous letters to Congress on September 1, 2017, November 16, 2017 and February 22, 2018, the Census Project advocated for more monies beyond the administration’s request of only $187 million above the FY2017 appropriation to “ramp-up” preparations for the 2020 Census.

The chart below, by the Center on Budget and Policy Priorities, traces the funding cycles of previous decennials in comparison to the Trump administration’s FY2018 budget request. 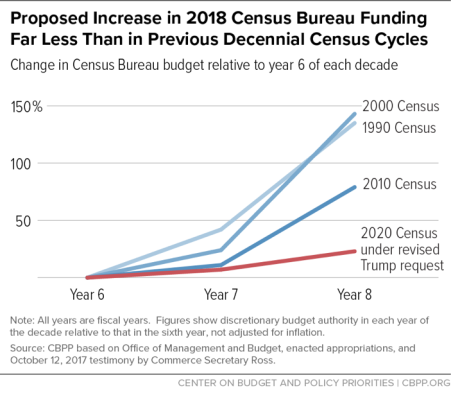 About The Census Project